For creating a general guide for people who will just start to have some discus in their tanks, I will try to narrow down and focus on the most basic but import things from my 12 years experience in discus hobby.

The name”discus” best explained this fish’s shape. The rounder the better in terms of public aesthetic. The following pictures give you some ideas of how a good discus fish should look like, and what kind of shape you should avoid when buying fish.

As you can see from the picture above (The discus won the first price of discus competition Class 2 in AQUARAMA 2011 held in Singapore), the body of the fish can almost fit into a circle. This is an indication of good growing of a discus fish and a good health. (We will talk about WHY in later sections)

Whereas, the pictures blow is a typical example of poorly raised discus as an elongated body has been formed during its growing process. It has lost discus’s iconic shape and should not be considered as a good discus fish for both display and cultivation purposes

For starters, the first discus fish does not have to be a good discus, but has to be a healthy one.

It may not be easy for you to understand the difference between “good” and “healthy”, so think it in this way, a good fish discus means pretty/good looking that a fish only can be called GOOD when it has a descend shape (including a balanced portion of different body parts) as we talked about in last section and a natural but nice coloration which I will break down into more details in next section.

On the other hand, a healthy discus means free of diseases that can spread and cause problems in your tank, especially when you had other fish before you introduce your new discus into it.(I had so many bad experiences and learnt lots of lessons from it when I was a starter).

A healthy discus may not be a good one depending on the prices or the availability, however, it at least can save you from loads of trouble. Many people complain a lot about discus fish and never have them again since a failure start. Discus should not be the one to blamed; it is largely because someone unintentionally had a few unhealthy fish to start with due to the lack of relevant knowledge on purchasing, and all fish die in a week or less that the owner is scared of the awfulness and not willing to start again.

If you are a newbie to discus hobby, there are 3 simple but important rules to follow,I will drill them down with explainations and pictures as an aid:

1. do not buy ultra skinny discus 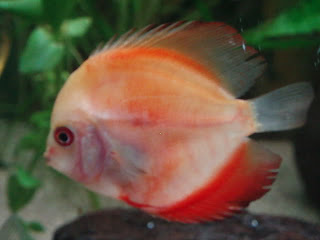 the king of aquarium fish-discus

continuing...will be focusing on discus fish...

They are from the "Glasses man"-Alexander piwowarski in germany, He owns his glasses shop and had a state of art discus hatchery in his basement under the shop. His iconic red-turquise discus (as following video),has reached its F8(the 8th generation from its original wild forms). As a result of breeding in captivity, his red-turquise has formed an outstanding pattern and coloration,once has been ranked number one red-turquise by many discus enthusiasts unofficially.

Empathy for the Devil